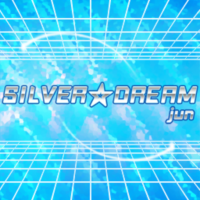 This is a boss song like "SUPER SAMURAI" in HOTTEST PARTY.
I was going to make a rave type song like the previous song. But somehow I felt an urge to create a "happy hardcore" tune. Then I ended up making this song!
I don't know why but I sometimes feel the urge to write "happy hardcore" songs.

I picked the title, "SILVER☆DREAM," to give you a sparkling image.
It's a pretty difficult song, but get the sparkling feel and enjoy dancing!

I want to sing this song myself someday...