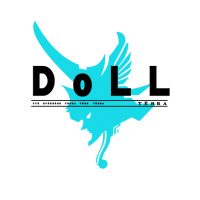 DoLL.
That is the reality of destroying your feelings, yet letting your smile never fade.
Are you sad? Do you want to cry? You still can't let your smile fade.
Your heart aches, as if your soul is going to tear apart? ... even so, you keep smiling.
Because ... because, you can't look for anything else in life.

On the other hand, do you think there is such thing as "eternity"?

jun wrote the music and lyrics for DoLL; I was in charge of the arrangement. I was left with such a deep impression at jun's piano demo, I wanted to expand on the DoLL world view, even while finding a fitting way to incorporate it into the HYPER series of songs. To that end, I was glad to throw countless time and effort into the arrangement for DoLL.

TЁЯRΑ is the representation of my belief in the power of "pop". So, I will be happy if the TЁЯRΑ sound can reach even just one person.

I've managed to make a movie as powerfully touching and joy-bringing as TERRA's music. Or rather, it happened of its own accord.

Really, though it's anime (it looks a bit like a movie extra, doesn't it?), even though the song is great, just before I started this, I fell into an unexpected increased workload.

Every day this song called out to me, and I could hear it during every waking hour of every day. On the trains, in my studio at home, and of course whenever I was at work. Man, how many times have I heard this? I can't even count anymore. But I never got tired of it. What's with that?

This song is so well done that no matter how much you hear it, it still stays good. On top of that, the BPM is nice and speedy, and lends itself to being felt well.

Anyhow, it seems that all across the country, people are playing this song over and over; it's very moving to see.

※Denotes chart has been revised from the older AC chart (total notes: 327).