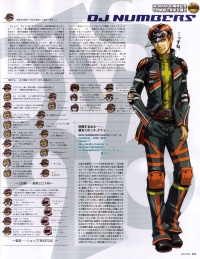 A recent graduate from the best fine arts school in Japan, Eiri is now training to become better at IIDX by touring Japan on a bike and battling players around the country. He's a nihilistic man influenced by the protagonist of Myu Koshiba's movie "lower world". He also loves his coffee. No-one understands how he can manage to drink so much coffee without even owning a coffee maker, but you'll almost always find him with his precious cup full of strong black.

One hot summer day, Eiri stopped at the gas station where Nix works. Displeased with Nix' service attitude, Eiri beat him around a little and force-fed him Nagano ramen to teach him a lesson about the nature of polite Japanese culture. Embarrassingly, when he challenged Nix to a IIDX match, he lost. Therefore, he decided to stay in the area until he was good enough to beat Nix. (Since then, he's been beaten by Yuz, Nyah, Shi-low, Ereki, and even Zilch, so it seems he'll be around for a while ... ) In any case, he now works at the same gas station as Nix, and managed to invite himself into Siren's small apartment. Their two voices harmonize in cries of "Hey, you!" day and night, creating a uniquely compused musical work. Eiri had always hoped to settle down one day with a beautiful wife, but it seems he'll have to make do with Siren for now.