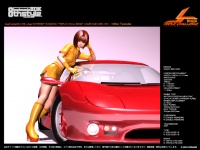 Mika is a college student living in the Tokyo area. She was exposed to the world of driving fairly early on, and had attained a certain level of skill by the end of her high school career. Perhaps in part due to this, and in part due to reasonable academic performance, she was something of a campus sensation - everybody loved Mika. Unfortunately, she fell into unfortunate personal circumstances in her senior year of high school. Shunned by he peers and warily regarded by potential universities, she finished out her high school days suffering in solitude.

Despite these troubles, Mika managed to get admitted to a university far enough away to make transportation an issue, so she saved enough money from part-time work to buy a car for use commuting to and from school. Around this time she discovered eurobeat, and began to get back into the joy of refining her driving technique. Mika is the kind of driver that gradually improves her technique based on theory, though she has excellent reflexes, so she can also manage to drive wildly if the occasion calls for it.