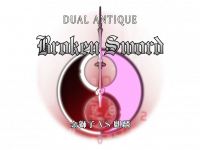 I tried to stop Kirin from losing control. I couldn't, lest something happened.

Losing control was inevitable, with the fast piano sounds and the low bass.

I wasn't careful. With some effort, the Kinjinshi VS Kirin collaboration created "Broken Sword", the ultimate in modern music. I'm good.

I am Kirin, the reclusive survivor.

This song, my first, "Broken Sword", is a collaboration with my brother, Kinjinshi.

We played. I smiled. He laughed.

We, with our swords, shall fight. (But broken swords can't kill.)

beatmania IIDX difficulty rated from 1 to 12.(Ratings and notecounts obtained from BEMANIWiki 2nd.)