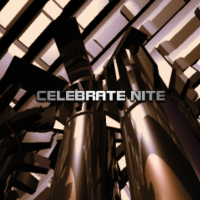 First seen in the DDR series, and later in ParaParaParadise, I like to think of this song as part of a trilogy that goes: BRILLIANT 2U → CELEBRATE NITE → DYNAMITE RAVE. I feel that these three songs represent the hot movement of the BEMANI scene at the time, and CELEBRATE NITE is a track I like from the good old days. How many times do you think you may see this form of a song again similar to this one? Kiss me all night long. The connection of the two songs is in everyone's thoughts.

"CELEBRATE NITE" by N.M.R debuted on Dance Dance Revolution KONAMIX and is one of the first club style songs from the artist. Featuring rap lyrics, catchy female vocals like "Come on baby, its party time" and smooth club beats, "CELEBRATE NITE" will have you celebrating the night away in no time. Check out the new "EURO TRANCE STYLE" remix in the Nonstop game mode.

CELEBRATE NITE also includes the original ParaParaParadise video. MR. SUZUKI provided us the video for this song. Emergencies resulted in these videos being used in 6th, 7th, and 8th. Thank you all!

beatmania IIDX difficulty rated 1 to 7+ in 8th and 9th style, 1 to 8 in 10th style, 1 to 8+ in IIDX RED, and from 1 to 12 from HAPPY SKY onwards.
DanceDanceRevolution difficulty from 2ndMIX CLUB VER. through 5thMIX (and the Solo games) rated from 1 to 9, 1 to 10 from DDRMAX2 to SuperNOVA2, and 1 to 20 from X onwards. (Ratings and notecounts obtained from BEMANIWiki 2nd.)

※ These charts are different from the other charts: