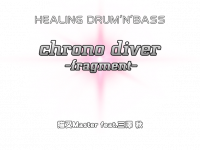 A voice that cries out loudly yet cannot be reached.
A girl that has been confined and altered by two time spells.
I will try to tell their stories.

I do think that the alteration of time is a metaphor of how one wants to change the past.
But those wishes can never be fulfilled.
This is a sung story.

Hello, I am Aki Misawa, and I was in charge for the lyrics and vocals for this song.

I wanted this song to portray a sense of loneliness and distance while sounding good.
It was a lot of fun making the lyrics and vocals for this.
It was difficult to whisper the lyrics without sounding lethargic.
But it was very fun to sing this! It's the truth!

At the end of the world and of time, a lonely girl's voice calls out.
Please listen carefully to its meaning.

Misawa's beautiful and gentle voice made the lyrics perfect.
(※ Personally, it is one of my favorites now)
Her ephemeral voice makes you feel uplifted and compliments Nekomata's song style.
This is a worthy song to represent the "Present" phase.

A part of the song lyrics I listened to over and over again.
I think it was classic.

Since this is the theme song for PENDUAL, I wanted to portray a point of time where time has stopped.
I put Celica and Erika as mirror images of each other to portray this.

There were a lot of characters and numbers that were added into chrono diver.
It was very hard to sync the characters and the backgrounds to the music.
I had to keep close attention to this.