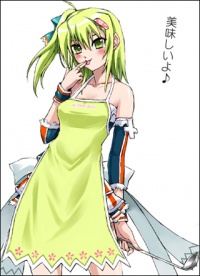 First appearing in 4th, Erika moved to Tokyo with her family from Hokkaido a few years ago. Her first two part-time jobs in Shinjuku ended soon after she started them, when she had her first on-the-job encounters with cockroaches. (It was her first time seeing them ever.) Unfortunately, this set a trend of switching around among part-time jobs. Her first two were at fast-food restaurants, her 8th was at a coffee shop ... Currently, she's on her 10th job, working as a model at ROOTS26. The pay isn't that great, but she gets free clothing in return. Lately, Erika has been getting into mountain biking, and likes hanging around Akihabara (and shopping ... ).

Erika can always be found playing good-cool songs on IIDX Wednesdays and Saturdays after her job at "a certain game center". She was able to progress from Light 7 to 7 Keys fairly soon after she started playing.

Erika is Celica's older twin sister. Unlike Celica, however, Erika was told on her 18th birthday by her foster father that she was adopted and has a younger sister. However, two and a half years before that, the orphanage where she and Celica were raised was destroyed in a fire, and all records about the two were lost. Even the orphanage directors, an old married couple, had died. Thus, the trail between the two is obscure at best. However, she periodically has dreams about her younger sister in a park, clinging to her and crying after getting in a fight ... .. with a cat. (And that's why Celica hates cats.) Unfortunately, she can never remember her face. Even though she seems happy, the uncertainty about the whereabouts of her sister gnaw at her from inside, and a lot of her efforts go towards finding her sister.

Though she doesn't know about Celica's relation to her, Erika gets along very well with her. They've run events together a few times - fashion shows and club events. She's also pretty good friends with Shi-low - he's really the only person she talks about her future with. Erika has also spent a good amount of time with K-na, having more or less made herself his apprentice.