This page is about the beatmania IIDX DJ Tsugaru. For the DDRMAX2 -DanceDanceRevolution 7thMIX- song, see TSUGARU. 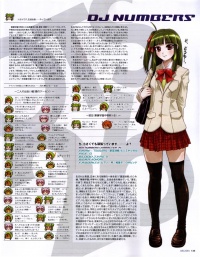 The young daughter of a wealthy former zaibatsu family, Tsugaru is the student council president at the Tokyo Private Boarding School, the same school Daruma attends. She's about the same age Nyah's younger sister would be if she were still alive, and there's a striking resemblance between the two.

Tsugaru's parents have great hopes for her, and she is expected to set the standard for the rest of the students in the school. Due to this situation, she's placed under enormous stress every day. Perhaps as a reaction to this, she's taken around to wandering around town late at night to blow off steam. She has to sneak in to game centers and clubs that enforce age limits on entry. Her cool, professional demeanor from the daytime disappears at night, and she feels free to act more herself. Through IIDX, she was drawn to Daruma, who she felt had a different sort of freedom than she had. She tries to make her way into Celica's group, but suffers from insecurity about her own ability to draw people to her.

Despite having to sneak into game centers to play IIDX, Tsugaru has managed to make faster progress than Daruma. She dislikes Zilch, with his weird hairdo, and Duel's strange way of speaking.