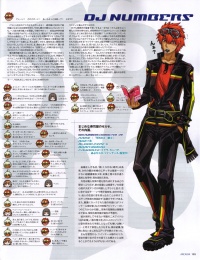 Tekka. A type of tuna sushi; the tuna provides a nice red color, and the nori wrapping provides black. Tekka loves tuna sushi. In fact, he's the eldest son of Kurogane Sushi near Shiki's game center, and was raised strictly so that he might become the next master of the shop. He works very hard to that end so that he might achive the master's taste of his grandfather. He's very proud to have the single character of his family's shop name as the first part of his name. Though he's very much a wholesome, "early to bed early to rise" type of young man, he also has the fiery heart of an artist (no matter that his medium is delicious raw fish).

Tekka goes to the same high school as Iroha and Lilith (who are popular among the boys there). Since the easiest way to get close to them - join the occult research club they're attached to - isn't appealing to most people, he started going to the game center they were known to frequent. He's only a light player in IIDX, since he's only recently started, but he's been training "in secret" since being shown up by Eiri and Nix. He's been making pretty good progress, owing perhaps to the delicate movement and concentration learned in his position as a sushi chef.