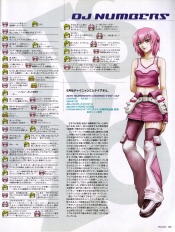 Nyah's first appearance in IIDX was the 2nd style poster. She lives with her grandfather in Chinatown; he runs a restaurant called the Blue Dragon Flower. Nyah moved to Tokyo from Hong Kong after losing her younger sister in an accident.

Nyah's IIDX experience begins with beatmania IIDX substream, so she's been around for a while. It's said that if she plays someone in a match and loses, she'll give her opponent an invitation to a one-day date over a full-course Chinese meal. For a long time, though, no-one knew if it was real or not; she never lost. Ever. Even to Yuz. Finally, though, she got careless playing against Zilch (who never left her alone. Ever. Even though he sucks) ... and lost. Even though she was sick the day of the match (with a 104 degree Celsius temperature!), the defeat was overwhelming, and she broke down in public. The gap between her usual cool image and her break down astonished and disturbed her friends. Even though Zilch even dressed up nicely for the date (though he screwed up other things, remembering Zilch's face really pisses her off since then.

Nyah's a trance fan, but has recently begun listening to jazz to cure the stress of busy days. She's strict with men, but gentle with children! Unfortunately, she seems to attract a lot of fanboys. Zilch is one of them, and she flames him pretty much every day (since he won't leave her alone). She's had a much more friendly competitive relationship with Yuz. She's also about as close to Lilith as anyone except Shem is. Lilith helps fill the void left by the death of Nyah's younger sister many years ago. (If she were still alive, she'd probably be Tsugaru's age. Speaking of which, Tsugaru really looks like her younger sister; the first time they met, Nyah nearly dropped the dinner she was carrying.)