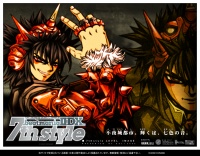 Lilith's devoted older brother, he's been watching over her since their parents died. He's really devoted his life to taking care of her, and spent many years burning through part time jobs to try to make ends meet and make sure her needs were always provided for. Eventually he was able to open his own shop, ROOTS26, in the trendy Harajuku area of Tokyo. (Many of the other DJs wear ROOTS26 apparel.) Shem has a real passion, and a knack, for fashion design, and he loves making his friends try on his designs. He also has a thing for neckties, and is never seen without one. More recently, Shem has opened a VJ cafe called Xenon-世音- ("World Sound").

Shem is ... decent, when it comes to IIDX. He likes attending various events, and he likes dressing up. He lost both of his parents early on. Since he's had to raise Lilith on his own, he's somewhat overprotective of her. However, he and Lilith are able to live the comfortable lives they lead now because he spent many years sacrificing everything to earn enough money for the both of them, burning through part-time jobs, and finally managing to open his own store. Most recently he's come to dislike bearded men. Naturally, there's some tension between him and Siren.

Aside from his close, yet somewhat overprotective tendencies toward Lilith, the fact that he employs Ereki, and the fact that he basically keeps everyone clothed, Shem doesn't really have that much of a relationship with most of Celica's group ... except Siren. Unfortunately, that relationship isn't very good.