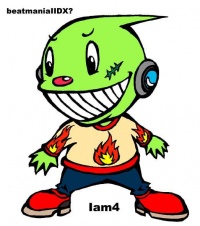 Originally sent by his world to spy on the Earth before a planned invasion by his people, Fireboy crashed his ship in a Tokyo arcade and subsequently lost his memory. At first, he was thought to be a stuffed animal, and Tekka eventually won him in an arcade game and took him home, where he acquired a taste for sushi. Tekka, to bring him luck, occasionally brought him to the arcade when playing IIDX.

This beatmania IIDX-related article is a stub. You can help complete this page by contributing to it.