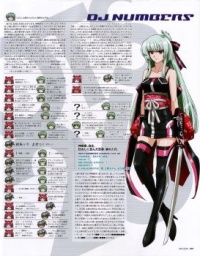 Saya came to Tokyo looking for Ereki, at the behest of an unknown individual. Staying under the shelter of a canopy during a rainstorm, Iroha ran into her. After asking Iroha about him, both ran into Ameto and Lilith, where Ameto and Iroha were reunited. Soon after, Ereki ran into the group, and, to his consternation, also ran into Saya.

She is known as being very focused on her goals. She can also experience rapid mood swings, being friendly one moment and psychotic the next.