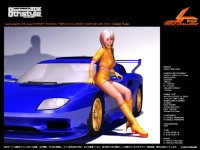 Akane first appeared in beatmania IIDX 7th style as the skilled rival of Mika and Yuri. She soon became friends with the other two. She is the oldest of the three. Together, they formed a racing team called the SPEEDY CATS.

She is currently a 9th dan on singles and a 10th dan on doubles.