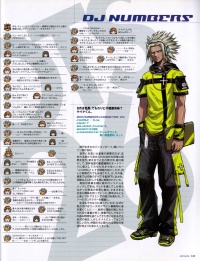 From Kobe, in the Kansai region. K-na is easily recognizeable by the mark on his forehead. He's good at math, and his dream is to become a "monster game programmer". Among the Shinjuku IIDX crowd he has something of a reputation as a "legendary hacker". As a matter of fact, he's known around the world as "αCLOCK", a genius hacker who can get into any network in the world. K-na is a straightforward young man consumed by some inner fire. He's a frank person who greets people with the words "Are you burning?"

K-na started playing IIDX on 4th style. He is a mid-level player who can easily pass songs like B4U and DXY!. Even so, he tends to complain about the quality of the graphics and programming when he plays.

K-na is actually an heir to the Oofuji family in Kobe. However, he always wanted to live a life of his own making, instead of one predestined by his lineage and handed to him at birth. As such, he understands Tsugaru best out of any of Celica's group of friends. He's been teaching Erika a good deal about computers, and has been searching for information on her sister for her, and seems to be on the tail af some good leads. In secret, he has something of a crush on Lilith. K-na has done a lot of things with Shiki and Zilch, including an aborted attempt at a comedy routine and the formation of a band "I-A-RU Kanbou".