This page is for the DanceDanceRevolution song B4U. For information on the J-Pop group formed by NAOKI, please see BeForU. 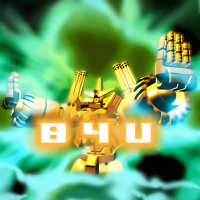 Experience high-energy dance that will keep you coming back for more.

This song is an upper number from D.D.R.4th MIX, completely filled with NAOKI's sound, and the driving feeling of AARON G's MC, while the sharp synth leads and hit sounds combine with the beat like an addictive sensation, further enhancing the rave feeling.
On the game, it's quite challenging with the key placement in the first-half, and the intermittent scratching in the second half. By all means, I'd like you to create your own upper groove!!

You have unlocked the song "B4U" by NAOKI. Debuting on Dance Dance Revolution KONAMIX, "B4U" is a perfect example of the ideal Dance Dance Revolution song with its physically challenging dance steps, fast-paced rhythms and vocals and competitive themes. Check out the new "B4 ZA BEAT MIX" in this game as well.

The characteristic intro announces the start of "something" with a continuous high tension from "that song"!
When substream/CLUB VERSION 2 were being produced at that time, all the team members participated in intense Battle play (during difficulty review/bug checks/trial playthrough), and it was well received in the market, who showed visible excitement and stood out.

However, I think you can recognize the true charm of B4U if you listen closely, which is a super power-up from "that song", which is "Brilliant 2U".
It's full of speed and power which seems categorically more associated with "running" than "dancing", and defies the definition of a new flow of Euro high tension. The song is sublimated into a dimension, which reproduces the uplifting and euphoric feelings of a fighting spirit similar to a "battle"!

The route of NAOKI's upper Euro "car-themed" movie was discussed in a conversation with dj TAKA to be "quite on point". The well-known Mika Tsukuba appears as a rival in the movie!? (See the Q&A section for details). With that scenario in mind, I created an original movie about car battles.
The effect of having two characters appear was demonstrated in the chorus although it wasn't part of the story, which I think ended up becoming quite good.

Speaking of a battle between girls, dj TAKA and KANI witnessed a high score attack battle between two girls at an arcade when the production of IIDX 4th concluded, and I remember them filled with emotion and excitement as they said that "IIDX has entered a new phase～!".

※ Denotes chart has been revised from the older/newer AC chart (total notes: 300).