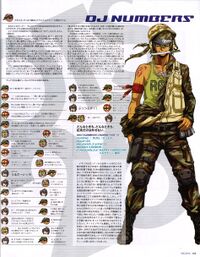 Duel is an English import. As a boy he was something of a troublemaker, and was always getting into fights. However, at one point he happened to see one of the movies from the long running series "Otoko wa Tsurai yo". Impressed by the protagonist, Tora, he decided to reform, and eventually ended up studying overseas ... in Japan. There, he discovered and immersed himself in IIDX.

Duel has a high regard for order and civilization, and always observes tea time. Eventually, he'd like to start a net business for his friends back in England, selling Japanese music and spreading Japanese culture throughout the world. His speech is a little weird, as it's influenced by the dialects of Japanese speakers all over the country.