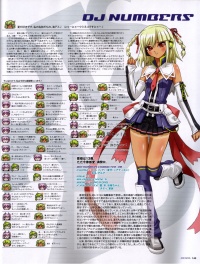 Xia in her new costume

She was then raised by a mysterious man. This individual cared for her like she was his own daughter. He had lost his wife earlier in a storm, and so she was his only family left. He was a classical piano player, and Xia picked up her love of music from him.

Eventually, Xia learned about her true heritage. She then decided to come to Japan and reunite with her sister.

Coming to Japan, Xia met up with her long-lost sister. The normally composed Nyah was in total shock over her appearance.

She now lives with her sister, and also attends the same school as Daruma and Tsugaru.

She is often nice and gentle to others, but when angered can become quite fearsome.