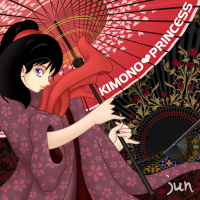 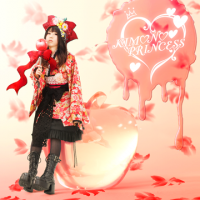 From DDR to DanceEvolution, the kimono princess has finally landed in pop'n♥
Being able to play this song in various ways makes me feel really happy.

For KIMONO♥PRINCESS, I aimed to make a pop and cute melody, which is easy to play despite the fast BPM.
I would be happy if you play this song for a long time, sometimes dancing to it, and hitting buttons other times.

I missed seeing jun and wac arguing about charts in front of the arcade cabinet.
I thought they were arguing about the chart layout, but before I knew it, they discussed the difficulty of using Twitter.
So that's when I realized.

Only EX has the soflan gimmick, but it's not an exaggeration to say that jun's aggressive part was like that.
But rather, jun's kindness is not shown throughout the entire chart.
It's amazing, jun!

To those of you who liked this song!
By all means, please dance to it in DanEvo!

The DanEvo choreography for KIMONO♥PRINCESS has too much of a strong impact, so the dance appears in my mind even if I'm playing pop'n.
Join both hands together, and bow left and right. I heard a strange story that Japanese people use one hand to chop through a crowd, but this song is also like a cross-cultural exchange.

You can see the choreography in the official movie here. Remember it and make your DanEvo ARCADE debut!

Is this Princess KIKYO?~ She's a high-class kimono princess, isn't she! Oh, boots.
I was surprised at the opening BPM and skeleton, that I "quickly!" fell~.
But I was alright because I had a full stomach.
Wasn't she the person who liked skeletons...?
It's OK to be full, but I want to take better care of myself.

Even if I know it's coming, the low speed in the middle section defeats me..

For me, The World stops can be placed in DDR charts.
Time stops flowing in these type of songs.
After that, the consistency somehow fits together.
I still don't understand that logic, but it's reproduced in pop'n like this.
I have to calculate the number of bars and beats using advanced math skills, which my brain hasn't used in a while, and I almost burn out from overheating, but it's not bad to occasionally exercise it.
This was the most difficult math I've ever done.

I shouted "Whoa!" with all my might.
I heard the song a lot beforehand, so I thought I knew it...
And before the hook... Will that day come when I can see it...
I like its high-tension feeling.

※ The notecount of this chart is different from the old 5-Buttons chart (total notes: 115).