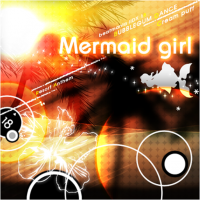 From the group HHH, here is Halka.

This time, Halka and moimoi have teamed up to form a new group, called Cream puff.

Well, for the genre Bubblegum Dance, one important thing is to have cute vocals!
When I asked to add this type of song, they said they "would do it", but it took a few years.

Finally, after a while, they allowed me to do it!
Along with this came the responsibility of producing this.

For me to write the lyrics... it was a big responsibility.
I remember thinking about them when awake or asleep.

After a while, the shiny song Mermaid girl was born.
The amount of revisions and the finished product differed greatly from the original.

As for the singer of the song, it is no other than the super cute vocalist from Supernova, moimoi!
And Ryu☆, with his great reputation for catchy melodies and sparkly sounds, came to help too!
With this great duo helping, the completion of this song far surpassed my expectations!!!

Even now, I still have great nostalgia over those happy days☆

One day, I received the lyrics to this shiny and sparkly melody.

I watched it, and the moment I listened to it, my hair shined in rainbow colors!
Wanting to project this image, I sung very hard!

Special thanks go out to Ryu☆ and Halka for making such a wonderful song.

Now everyone! ♪ ♪ ♪ Let us go to a world with rainbows together...

Hey, it's Ryu☆, the one in charge for the sound of Cream puff/Mermaid girl.
Because of the directions of Halka P, I am proud of making this great song!
I look forward to seeing a lot of plays for this song!

Hello, I'm Halka!
I'm usually a member of HHH, but I was in charge of producing and writing lyrics here.

The story is based on The Little Mermaid.
The lyrics are a bit sad, but if you have ever shared these same feelings, you can relate to them.
That's why every girl is a princess!

Cream puff has the same meaning in English.
What kind of cream puffs do you like?

I like stacking a tower of small puffs.
I want to share them with everyone, have some tea, and enjoy eating them together!

Halka invited me to sing Mermaid girl, and it's my very, very lucky song!
This song allowed me to meet everyone who enjoys playing music games☆彡

2 years later, everyone said
"Mermaid girl is my favorite song!"
"I know moimoi from Mermaid girl"
Which made me very happy^^

The lyrics are sad, but cute at the same time
(Such as "Sugar and spices and all that's nice"!)
With a sparkling melody, it gave birth to a new moimoi voice that has never been heard before!

By the way, I love cream puffs!!
I love all kinds of them, whether they have soft dough or crunchy tops!!!

I'm Ryu☆, who's in charge of the sound.
Mermaid girl has finally arrived in pop'n.

It's thanks to your support that you can play this song on various games.
Thank you very much

A wish sung by a lovely singing voice is hidden by the foamy waters.
Would you notice me?

I showed up out of the fleeting sweet and beautiful paradise.
Would you notice me?

But you'll not notice
Because it is a sad fairy tale...

A mermaid is perfect for fantasia!
That's why we decided to crossover it.
When I heard it for the first time when IIDX18 was released, I wondered, "Who is this cute vocalist?".
After that, moimoi received more attention. It's a good story, isn't it?
I want to eat cream puffs every once------------- in a while, maybe twice a year.
The moist ones from convenience stores are enough for me.

Wo~w! Now you can play it in pop'n quite early! I love how cute it is.

When I heard the song for the first time, I thought it was sparkling and cute~ and I didn't realize the lyrics were sad!
The Little Mermaid has a sad fate, someone please make her happy.

This cute song has a strong image of a sailor girl sporting a bare midriff.
pop'n has a youthful mermaid girl which fits perfectly with the song title!

Was it a sad song!? I don't understand English, so I thought the song was much brighter...
As a side note, I like cream puffs filled with cream.

moimoi's success is great, isn't it? She's already a pop'n character too!
Recently, drinking cream puffs seems to be popular~

It's wonderful that the unit name is named after a candy. It contains perfect, sweet vocals, and is a sparkling song♪
I'm impressed that it's sung well at the beginning, like a tongue twister.
Here, I tried to imitate it to learn how to be cute, but it doesn't seem to have yellow temperance. ...shionin is in the mood to eat choux ice cream today.

The hard ones have a luxurious quality that gives me high satisfaction, but I also like soft ones. I think soft puffs are nice for my stomach.
I'm happy if it not only contains custard, but fresh cream as well. I also like ice cream puffs for some reason.
I'm a person who likes éclairs. Éclair is a cool name, isn't it?

Ah, speaking of bubblegum, it's more like old-fashioned pop, and I'm not familiar with dance music myself, but when I first heard this song, it reminded me of the early DDR years and I felt nostalgic.
This song was my first moimoi song. Surprisingly, it's very recent.

I just noticed, but it's a mermaid because of bubblegum, isn't it? Or is it bubblegum because of a mermaid?
Either way, I can't help but hope KIRARA doesn't disappear like a bubble again.

It's abbreviated as "Mamega", which Mameshiba is familiar with.
It's like I'm being absorbed into something like this.
It's somehow nostalgic, no, is it new after all? It's somewhat a strange song.
KIRARA also matches that feeling.

※ The notecount of this chart is different from the old 5-Buttons chart (total notes: 160).