This page is for the KOTONOHOUSE song titled take me higher. For other songs of the same title, please see Take me higher (disambiguation). 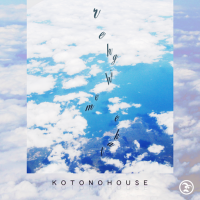