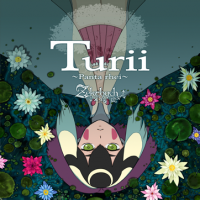 Once upon a time.

The eight pieces of Ristaccia were found.

And the eight races, now in possession of the secret power of Ristaccia, awakened.

To balance the distorted stream of energy, the planet had been prodded into action by Ristaccia.

Finally, a mystical giant tree was born on the island of Turii.

And under that giant tree, once lived a special kind of race, the "people of the stars".

They knew neither about the other eight races, nor about Ristaccia. They just lived there peacefully and quietly.

Different from the other eight races, they didn't have even qualia or sexuality. They were completely locked out of the gate of "mutation". Therefore, they would never bring unbalance to the world, and, likewise, would never be unbalanced.

They kept their population stable, and together with the giant tree, they had become the power of balance, to counter the chaos power of Ristaccia.

Thanks to their existence, the planet was preserved from destruction after the Ristaccia War. Under the power of balance, at last, the once ruined earth was restored. All chaos returned to great harmony once again.

But, this good thing would not last forever. An unexpected condition, finally, smashed the last hope for this planet.

On a mysterious island, where the site for Turii was located, a ceremony involving the people of the stars was held every one and a half years.

There could only be, at most, 10 of these beings in the world, and their ages were marked on their bodies by rings.

Malchut, the eldest, realized that she would have to return to nature in order to maintain the Turii's balance in the world. So after a ceremony with song and dancing in front of the nine other star people, she quietly went into the water.

But, out of youthful exuberance, Kukaru, who had been observing the ceremony, interrupted the ceremony. He belonged to an agency, Sazaragi, that was responsible for exploring distant lands and their heritage. In his sense of justice, Kukaru rescued Malchut from drowning, much to his relief and her shock. Because of his interference, the harmonious circulating flow of Turii had been interrupted and chaos would soon begin.

Malchut was then taken away to Mashinowa, leaving the other nine star people behind on the island, causing disorder. This break in the ring of harmony caused the disruption of causality between the stars and the planet.

Malchut gradually awakened to the disruption of the natural balance of the planet. She realized that the disruption was now present and that she now did not have the power to eliminate it.

Excerpt from The Epic of Zektbach, Chapter 5: Holy Tree Turii And the People of the Stars

Hey, everyone, this is Zektbach.

Here we investigate Turii ～Panta rhei～. This is the start of an epic and sequel to all the others.

This is the story of Taiki and the 10 Turii star people who lived on an island far from others.

The location of the island was a secret; the goal of the stars was to maintain the natural balance of the supernatural distorted energy in secret. However, this cycle was observed and disturbed by a certain young man who came to them.

Well, this story is examined by a wonderful singer. Shikata Akiko's beautiful voice is filled with fantasy. She added a lot of depth into the story with her voice.

Well, it looks like we are finished with Turii ～Panta rhei～. This song was also recorded on The Epic of Zektbach -Ristaccia-. Shikata Akiko's voice will be prominently featured on the record.

So, until the next chapter, farewell!

Nice to meet you. I'm Shikata Akiko, and I was the one who sung the lyrics for Turii ～Panta rhei～.

I am happy to be part of such a great song! I was invited by Zektbach to sing with his beautiful lyrics, and I had a great time.

Because of the theme and the limited amount of time for the song, we had to cap the amount of lyrics for it. The lyrics however, are able to bring alive the images from the music.

The lyrics enhances the story from the music, so I had to think about how I would sing for each part of the song. This is a magnificent epic with Zektbach's touch. A fierce bright flood of sound, telling eloquently the story of Turii.

Whatever the outcome of the song or overall story, I really look forward to what I have created.

Panta rhei, in Greek, means the flow of everything. For much of the story, Turii remains much of a mystery, so please watch the keyboard and don't go crazy.

Here, for once, the tales are sprinkled all about, so I'll tell my side of the production.

This song is similar to the others I have worked with in that the movie and the song have to mesh well together.
It is also important here for this song.
At the beginning, I drew and drew whatever ideas and images, words, and feelings came to me from listening to the song.
Listening to the song, and the requests from the others, an idea for illustrating the story came to mind.
The completion of the movie goes from there.

Zektbach's epic is the story of a world, and like Zektbach, I had to imagine how the story and the video had to mesh together.
Trying to brainstorm together, we had many ideas, such as:


"This girl should not think of anything else...", said Zektbach.
"Ok, I'll do that!" I replied.
"The story of the twins is good!" "Well, it was very well done."
"Remember, the video has to express the story in a little over two minutes, so use it well!" "That looks interesting!"