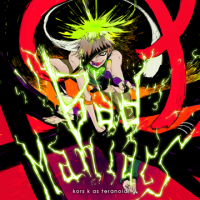 I feel that this sound is quite typical of industrial music.
This IIDX will be the final one for teranoid.
Thanks for all your support!

This is a bit of a wild video (which does go along with this wild song).

I first drew the boy's head without electricity, but it didn't feel right and added it in with additional flashes around it.
I then drew the boy's expression on his face, giving him a sort of wild but sexy look to him.
I was then inspired by tripping contact, copying some images from that. Even before I made this, I felt these songs were related.
I had the most fun drawing the tongue and lips image.