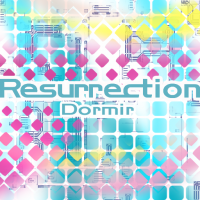 Hello, this is uncle TOMOSUKE of Dormir.

For DDR, I made an upbeat song as Sayonara trip.
However, I didn't forget the cuteness and wonder of Dormir. (*'v'*)
The theme is fantastic, and I hope everyone will dance with energy♪

Hello. This is crimm of Dormir. This is Resurrection.

This is the story of a girl who is alone in a broken world and collects various treasures to try to restore the original world.
I took the beautiful music and sang so that you could hear me. Everyone, how will you dance it? I hope you enjoy it ♪