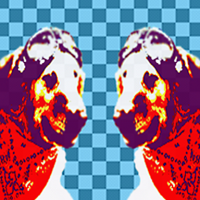 That popular drummania song makes its appearance in pop'n!

The Jimmy/Ono horns are blowing strongly again. Also, Mokky Sasamoto played the pianica. I went a little overdrive and distorted it.
This would make the pianica sound pretty cool, wouldn't it? In the long version, I further featured the pianica. After all, ska is fun.

It's a very nice song, isn't it? CASSANDRA is a prophet from Greek mythology. The horns are again blasting out to the 190 BPM ska rhythm. Don't miss the guitar and keyboard solos!

Mr.T.BONE can help you with all things drumming! He says he sometimes has a problem with his bucket slipping out of place due to his intense playing.

As "tapping" games, maybe drummania and pop'n are like siblings? So, for P8, we borrowed not only the song, but also the character. Thanks, GF&DM team!
Here's a secret bonus story about his production. Actually, we didn't have a name... for Mr. Bucket (alias)... The pop'n team was in an uproar when the GF&DM team asked us to "name him whatever you want". We ended up naming him "T-BONE" based on our self-contained interpretation mix of "bucket = a certain kind of tub" and "name of a certain steak". That's why the pop'n team are the godparents of the name "T-BONE".