Difference between revisions of "Asaki" 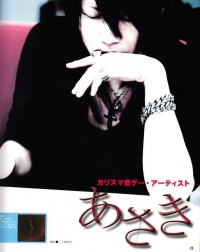 Asaki (born June 30th) is a BEMANI artist who made his debut in 2002 in GUITARFREAKS 7thMIX & drummania 6thMIX. He is best known for his songs in the GuitarFreaks & DrumMania, which combine elements of rock, visual kei, and industrial rock in them, most of them performed and produced entirely by himself. Asaki has also been a large contributor to pop'n music and REFLEC BEAT, and even has done a few beatmania IIDX songs. He is also served as the guitarist for many other BEMANI artists, including wac, TOMOSUKE, and Yuei Uematsu.

Despite being with KONAMI since 2002, though, very little is known about Asaki. His real name has never been revealed, he almost never makes appearances in BEMANI events, and very few pictures of him are on the Internet, most of them covering his face. Even the lyrics to his songs are affected by this; most only contain a part (if at all) of the lyrics in the BEMANI OST booklets they correspond to. It is known, though, that he was the vocalist for a visual kei band called Blanc Neige (group pic here) prior to joining KONAMI, though.