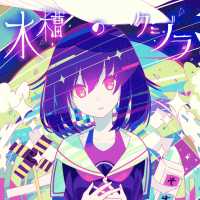 Good evening. I am Tezuka.
I got a fresh feeling thanks to a very enjoyable donut.
As I grew up by playing KONAMI music games, I am very happy to be involved by providing a song.
As an admirer of the old times, I think it'd be nice if the song would become memorable for other people.

Good morning! Amimi Oonishi!
Thank you for adopting song and illustration this time.
Since I like and admire very much both involved people, I am pleased to have been able to participate in the work together. You did it!
I want the people who play the new song to listen it again, I want them do it again, I'd be happy if it becomes a song that many people can think of!

Hello, △○□× is read as Miwashiiba.
Thank you for choosing the song this time.
Since Teduka and Amimi Oonishi put a lot of effort on their work, I also did my best at making the jacket.
I am really glad that my dream of an illustration of mine adopted in a music game is now reality.
Thank you very much.