Not to be confused with four-leaf. 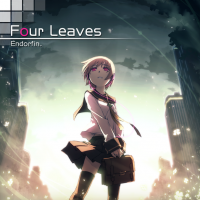 Nice to meet you!

Thank you very much for the adoption this time.

I sung several times as part of Endorfin.
"Four Leaves" was the first song recorded in sky_delta's studio and I am particularly deeply enthusiastic about it.

Something like to make you feel something started...
A thoroughly and bright refreshing sound,
I sang like to hit your feelings.

I'll be glad if you have fun playing!

Hello, my name is sky_delta and I made the song.
I was thinking if I would have liked to appear in SOUND VOLTEX as Endorfin. since the IV Production Confirmation Commemorative Original Song Contest was announced. Moreover, it is blue, fresh and 1600% faster. I enthusiastically joined the contest as Endorfin. rapidly. Thank you for recruiting us.

I want to say something more regarding how I am slightly surprised about this music piece. I personally feel that it is something VOLTEX lacks, a type of song direction which isn't seen often in the series. I am pleased if I could have blown in a new wind. Thank you.